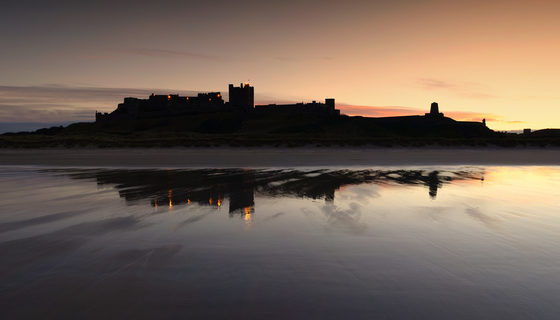 Northumberland has more castles than any other county in England. A legacy of its turbulent past, including the infamous Border wars which raged from the 14th to 16th centuries, Northumberland boasts over 70 castle sites.  Many have long since disappeared, some, like Dunstanburgh Castle and Berwick Castle, are romantic ruins. See others in their fully restored glory – like Bamburgh Castle, as seen on Robson Green’s Tales from Northumberland.

Towering 150 foot above the sea, Bamburgh Castle looks every inch the mighty citadel it once was. The very foundation stone of England, Bamburgh was a royal city during the 8th century and the castle the royal seat of the Kings of Northumbria. In 1464 Bamburgh became the first castle in England to fall to gunpowder during the War of the Roses. Fallen masonry from this onslaught can still be seen on the village green beneath. Falling into disrepair afterwards, Bamburgh was later bought and restored by the innovative Victorian inventor and genius Lord William Armstrong into the mighty castle you see today.

Head inland to Alnwick Castle, the second largest inhabited castle in England after Windsor Castle, which stands guard over the River Aln. Home to the Duke of Northumberland, Alnwick has been the Percy family’s home since the Norman invasion over 700 years ago. Alnwick boasts two famous Harrys – the impetuous knight Henry ‘Harry’ Percy, born here in 1364 and nicknamed ‘Hotspur’ because of his readiness to do battle. The other being none other than the boy wizard Harry Potter, a scholar at Alnwick, which doubled as Hogwarts in the Harry Potter films.

If you are planning a fun family day out in Northumberland then look no further than Warkworth Castle with its magnificent cross-shaped keep crowning a hilltop above the River Coquet.

For chilly tales of torture chambers and ghosts go to Chillingham Castle, reputedly one of the most haunted castles in England. Or live like the king or queen of the castle and spend a night or few at the award-winning Langley Castle Hotel.